Managing cookie setting
In order to offer you an optimal experience with the site, we use cookies. These are small text files that are saved on your computer. These include cookies for the operation and optimization of the page, as well as for services such as text or video chat, as well as for advertising based on your behavior on the Internet. For example, you can find out if you visit our website several times from the same device. We want to give you a choice of which cookies you allow:
Mandatory cookies
These cookies are necessary for navigating pages and using basic functions
necessary
Analytical cookies, marketing cookies, services of other companies (independent third-party providers)
Analytical cookies
These cookies help us better understand user behavior.
No
Yes
Marketing cookies
These cookies and similar technologies are used to display personalized and therefore relevant advertising content.
No
Yes
Privacy policy
Order status x
Sign out

Tyres ensure safety. It is therefore important that they are adapted to the weather conditions and approved for the vehicle. In addition, air pressure and tread depth should be right. There are different tyre types:

Wide tyres are very popular especially to drivers of sports cars. And to be honest: They just look damn good. Wide tyres, however, are not only reserved for vain fellows, but have some advantages everyone benefits from. The wider the tyre, the bigger the contact area on the ground - this improves energy transfer and grip especially during on dry roads.

Many wide tyres have a striking center groove and many v-shaped transverse grooves. Both ensure an optimum water transportation on wet roads. Moreover, because more sipes can be arranged on the enlarged surface, wide tyres are also good for winter time. The tyre manufacturers develop new concepts for more safety on ice and snow.

However, wide tyres have also disadvantages, mainly related to the costs: First, a larger contact area leads to more rolling resistance and therefore to a higher fuel consumption, on the other hand, these tyres are usually more expensive than conventional tyres. But on mytyres.co.uk you find cheap wide tyres of many brands.

XL tyres have nothing to do with particularly large tyres - they are reinforced. This means that their carrying capacity is increased. The load is defined by the load index. With a load index of 90 a tyre can weigh up to 600 kg. XL tyres may have a load index of 93 or even 95 compared to an identical non-reinforced tyre. Such a tyre is also called extra load or RF. It can be recognized by the XL at the end of the tyre labelling that is standardised.

An XL tyre has a more stable substructure and carcass with several layers. Such a tyre is run at a higher inflation pressure than normal. This technology is now also available for high speed tyres.

Tyres with less than 25 percent are rarely found on the market. When using such extreme dimensions you have to make compromises in comfort. Road bumps will be felt much straighter and the rolling noise increases, which effects the fuel consumption. Low profile tyres are more sensitive to impacts or other heavy dutys. If the road is in poor condition, the adhesion of these tyres suffers. Of course, low profile tyres have - apart from the look - also advantages. The curve handling is better as the stiffness is increased due to the low height. The lateral stability is also good. As with all tyres, however, you should take care of the correct air pressure, because deviations above or below can have unpleasant consequences. 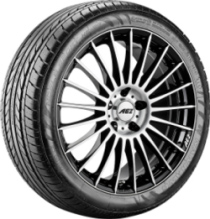 The purchase of new tyres entails costs that some drivers don't want to pay. Although primarily Asian tyres for small and compact class vehicles are often very cheap, some prefer to buy used tyres instead to save money. This may be worthwhile - or backfire. Buying well-preserved used tyres from renowned manufacturers is basically not wrong. Look at the them closely before buying.

If any damage is seen or they are is worn - hands off! These tyres are a hazard to you and other road users and should better be disposed of. In addition, there is a legal minimum tread depth of 1.6 mm. But even with 3 mm it is a purchase is inadvisable as the driving characteristics are not comparable to those of a new tyre that has a 8 mm deep tread. Take a coin and check the tread depth - if the edge of the coin disappears completely in tread, it is still ok.

Remould tyres or Retreated Tyres are an alternative to used tyres. These are old tyres that were undamaged and have received a new tread. If this was done by a professional, the quality is similiar to the one of new tyres - at a lower price. You can find retreaded tyres of many manufacturers in our online shop. Besides the attractive price another point militates for this type of tyre - retreaded tyres protect the environment.

Summer tyres should be used from Easter to October. Although there is no legal obligation for summer tyres , these tyres provide the best handling characteristics when temperatures are double-digit. Their rubber compound is hard and provides grip. The grooves collect the water and transport it away from the tyre so that it does not float.

In some countries the law requires winter tyres on winterly roads (or those with M+S label). They are softer than summer tyres and remain flexible even at low temperatures. The sipes interlock with snow and ice to improve traction.

All-season tyres, which are also called all-weather tyres, combine the advantages of summer and winter tyres, but they wear faster and have a higher rolling resistance, which increases fuel consumption. In addition to summer, winter and all-season tyres, mytyres.co.uk offers racing tyres, vintage tyres, retreaded tyres as well as those for motorcycles and commercial vehicles, off-road tyres and runflat tyres.