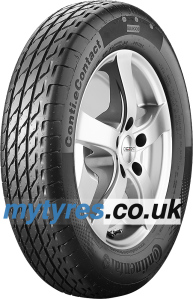 Please note:  We only supply the tyre. Even if a rim is shown in the photo, it is not included in the price.

You drive more miles per volt, we enjoy less emissions per mile

For electric vehicles in compact class

Reduced rolling resistance for highest mileage.
The Conti.eContact features a completely new design. In addition to a larger outer and rim diameter, which allows the same load capacity with reduced tyre width, it has an optimized sidewall flexing zone with less material, optimized tread depth and rigid ribs, as well as a flat contour. Through the resulting flexible sidewall area and reduced tread movement, the tyre offers optimized rolling resistance for highest mileage.

For hybrid vehicles in luxury and mid-sized class

High technology made with craftsmanship

Reduced rolling resistance, excellent handling and safety thanks to the Green Chilli compound.
Continental’s Green Chilli compound reduces the internal friction of the particles and polymers, thus also reducing rolling resistance. This has resulted in the Conti.eContact receiving the EU label grade A for fuel efficiency. In addition, special grip additives lead to improved grip and stable handling. Thanks to its reduced rolling resistance, the Conti.eContact has received the top mark for fuel efficiency. In addition, it boasts improved grip and stable handling.

Three different areas are tested: rolling resistance, wet grip and the rolling noise the tyre makes on the road.

The following are not affected by the EU Tyre Label: retreaded tyres, professional off-road tyres, racing tyres, tyres with additional devices to improve traction such as spiked tyres, T-type emergency tyres, special tyres for fitting to vehicles first registered before 1 October 1990, tyres with a maximum authorised speed of 80 km/h, tyres for rims with a nominal diameter of 254 mm or less or 635 mm or more.

With this regulation, the European Union is pursuing the goal of promoting economic and ecological efficiency in road traffic as well as increasing road safety on the one hand, and on the other hand, granting consumers more product transparency and at the same time serving as an active decision-making aid.

Already during the incorporation, experts criticise the fact that the EU Tyre Label unfortunately only shows a few product characteristics. Apart from rolling resistance, wet grip and rolling noise, which are the main focus of EU tyre labelling, tyres have much more important and safety-relevant product characteristics, such as aquaplaning properties, driving stability, service life, braking properties on dry and wet roads, behaviour in wintry conditions, etc.

Tyre manufacturers point out that test results from various institutions and journals remain an important information medium for the end consumer. These tests usually focus on further safety-relevant product characteristics besides the EU standard qualifications for tyre labelling, which are always important for the final customer.

* List prices, when available, provide a net basis for calculating sales prices between tire manufacturers and their distributors. In no event are they selling prices that are paid or customarily paid.

We will fit your tyres!

Choose one of our fitting station partners in your area: